Posted on September 3, 2018 by runningsquirreljo

The journey for this race most definitely started months ago. Accumulating points in order to be eligible to enter took 18months of long mountainous races. I used the points from the CCC 100km, Laverado 120km and Translantau 100km in Hong Kong.

The journey has just ended. It’s ever so anti climatic. Where did those 30hours go? All that hard work and focus and I crossed the finish line feeling so flat and devoid of emotion it surprised me.

I wanted to write this as soon as I finished but we travelled back late on Sunday night. I was tired when my head hit the pillow at 2am and to be honest I’m still pretty tired. We collected the dog who then decided to be ill/ have a melt down which took a trip to the vets and an anti-sickness, a painkiller and a sedative to settle.  I was then back at work. It’s only been today that I’ve felt emotional. I was cycling to feed a neighbours cat and got knocked off my bike. The shock made me cry for a good long while. I’m now done with feeling sorry for myself. There are lessons to be learnt for next year! Yes I need to go back!

Training essentially started 12 weeks out where I shifted focus to gaining elevation from just getting some runs and miles in. I like to run fast so it was difficult for me to drop all my speed sessions so I kept a few in along with the odd park run. I cross trained on the bike. I slept in an altitude tent to acclimatise to the elevation gain at the top of the hills. I visited the area twice – once for the Mont Blanc Marathon (a great race) and then again for a recce which didn’t quite go to plan. I sprained my ankle at the end of the first day so had to limp it back to a bus and travel back to Chamonix. This meant I missed essential long training days at a key moment. I couldn’t run for 10days which in itself wasn’t too bad as cycling can be used as an alternative but the timing 4 weeks out was far from ideal. The rest of the training went well. Lots of uphill running on a treadmill or reps of a local hill. Probably could have got some fast hiking practice in but I didn’t. I would rather run!

I tapered sensibly wanting to fully respect how long and hard the race would be. Being tired on the start would not be an excuse.

Jon and I got out to Chamonix late on Tuesday. Wednesday was number collection. I felt pretty stressed for some reason – ok you may say well of course you would be with what is ahead but that is not really like me. Then my hormones kicked in a week early so that explained that (sorry but this is a real life blog). Thursday and Friday kit preparation and relaxing. They enforced the cold weather mandatory kit as it was forecast to be minus 10 and wind chill. My crew was Pete from SCOTT Running and Jon, my husband. They were brilliant. It was so good to see their friendly supportive faces at the permitted checkpoints, saying all the right words of encouragement and providing me with all I needed. As the race went on I really felt like I was letting them down. The runner is just the person on show- none of these ultra races can be achieved without support on and off course.

The race departed Chamonix in the rain at 6pm. I was ready for this beast. Well I thought I was!

I started off doing what I felt was a comfortable pace. It was difficult to judge as the first 10km is essentially road and flat trail to Les Houches. I climbed well but never pushed. The first check point was 31km in. It was manic as everyone was still really close together. I could not find Jon so started to fill my pockets with apricots/ cheese/ cake etc from the aid station. Then I did one more check and he spotted me. Rubbish out and more food in (komfuel selection of gels, chews and Tailwind mainly). I was smiling and enjoying it immensely.

It was properly dark when I left and with 650 lumens (Ledlenser NEO10R) on my head I had complete vision so headed up the road happy in my tunnel of light. It was wet and cold. I had my warm gloves on and some waterproof ones over the top. My buff on my head and of course a waterproof jacket. In my pack was all the mandatory kit so I knew I had another 2 warm layers top and bottom if things really were bad at top of Col de Bonhomme (2329m). In hindsight maybe I did keep pace here but I honestly didn’t feel like I was pushing it. I caught up with Cat Bradley and then tried to stick with her but I probably should have asked myself what am I doing this far up the field. People told me running 100miles is like a lifetime lived in one day. But what I learnt is that you don’t get a second chance.

I was cautious descending Bonhomme as this is where I sprained my ankle. Running at night was magical. I could see ice flake patterns forming on the rocks. The moon was so bright when it appeared from behind the clouds. The clouds were keeping us warm because when the wind picked up it was very much chillier.

I sailed through the compulsory kit check at Chapieux. On leaving there my stomach decided to let me know that 52km of running into the night was not the right thing to be doing. However, energy felt good so being a tad lighter as I ascended Col de la Seigne (2516m) wasn’t so bad. I was pleased to be running this bit as I’d had to hobble it on the recce.

The top was shrouded in mist and it was hard to see where to go but I figured this was good as it made the pace steady. I was soon running on a track as the bad weather has re routed us around Col des Pyramides Calcaires. My focus was Courmayeur. However, I could sense I was descending into the town not feeling as I wanted to be. My stomach was still complaining but the odd stop here and there was no real excuse for such a slow pace. I had been running for 11hours and it was 5am. I swopped my tights for shorts and ditched my extra clothes thinking as the daylight arrives so will the warmth. What a stupid error! The wind picked up and it was freezing. Unbeknown to me many dropped out due to the cold weather. I left the aid station only to return as I had forgotten my poles. Doh! I ate and replenished my pack but as I write this I have read what other runners ate and I’m beginning to think I did not eat enough properly food. I was still on gels and chews and eating a bit of rice pudding.

On leaving Courmayeur it was the climb up to Bertone which really highlighted how lethargic I felt. I wrapped up at the top as the wind whistled around me.

As I climbed towards Grand Col Ferret (2490m) my little legs turned pink and my fingers lost their feeling. I didn’t hang about it was up and over. I could not collapse my poles as my thumbs could not apply enough pressure to the button.

Descending into La Fouly should have been enjoyable but I was getting frustrated with my performance. I kept willing my legs on. I remember a runner asking me as they passed if I could not push on through the discomfort of my quads but I really couldn’t. I shouted out loud but still no response. I felt deconditioned, I guess. Missing out on my recce and its long days was taking its toil now. I was passed by many. I kept recollecting my pace throughout this part of the course when I did the CCC in 2016 and the contrast was really demoralising.

Heading to Champex Lac was a case of putting one foot in front of the other. It was pathetic. I didn’t feel the need to hang around for too long at the aid stations. I just wanted to keep going. Jon has finished UTMB in 40hours so what excuse did I have?

At Trient I hiked in and hiked out. I’m not a strong hiker but it was faster than my shuffle!

At Vallorcine I changed my shoes and Injinji socks. I had badly stumped my toe (and then obviously again and again) and torn my Tibialis Anterior (shin muscle) so thought it might help reduce the pressure to go half a size up in shoe and it did. Amazingly for me I finished with no blisters either (just massive bags under my eyes!).

Night arrived again and I began to hallucinate. I saw people having a bath and rocks turning into animals. Vallorcine, via La Flegere took forever. I enjoyed the journey of training and I felt the race end should have been a journey of euphoria but it wasn’t. I felt nothing. 170km, 10,000m of elevation. 30hours 16mins, 19th female. 128th overall out of 1778 finishers (783 dropped out). Next year I’ll feel more! I’ll achieve more!

A massive thank you to all those who helped me through training and the race. I had the best kit (SCOTT Supertrac Ultra RC shoes and waterproofs etc; socks from Injinji); a great choice of nutrition from Komfuel; no sprained ankles due to careful footfall, diligent rehab and Rocktape; no altitude sickness courtesy of SportingEdge; great night vision from Ledlenser; great daily support from Symprove, Coffee Buddies, and Bounce Balls; inspiring crewing from Jon and Pete, great Rufus- dog care from my Mum, and during training Anne and Di; and finally great support from all those lovely people who cheered me on online and on route! 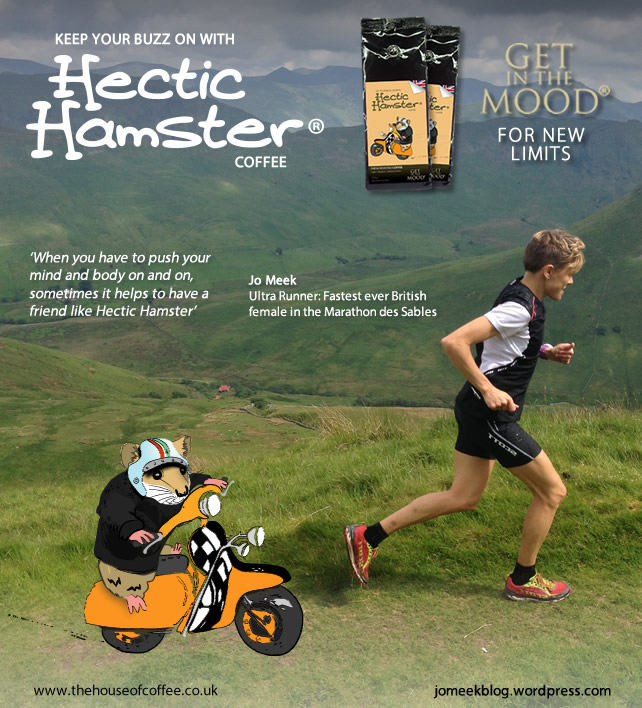